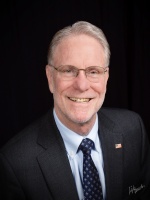 Reginald (Buzz) S. Stapczynski, ICMA-CM has 40 years of public sector management experience at the local, county, and state levels of government.  He served as Town Manager of Andover, MA for 25 years; as Chief Executive Officer he was responsible for the administration and management of a full-service municipality.  He was responsible for: $170 million operating budget for municipal/school departments; maintenance and construction of municipal/school infrastructures, managing millions in capital projects; economic development/planning of the Town’s industrial base including Fortune 500 companies, major hotels, and private educational institutions. Buzz also, with the Superintendent of Schools, managed a fully combined and consolidated town/school human resources department.  During his tenure the rating agencies recognized his administration for outstanding fiscal planning and management by awarding Andover with the AAA bond rating.  He also served as Town  Manager in Wilmington, MA for many years.  Buzz worked for the Commonwealth of Massachusetts in the Department of Mental Health as a Budget Manager.  He also interned in the Town of Danvers, MA for the well-known Mentor/Town Manager Bob Curtis.  Prior to coming to Massachusetts, Stapczynski worked for Fairfax County, Virginia as a Budget Analyst in the Office of Management and Budget.  Buzz served as President of the Massachusetts Municipal Association (MMA) and is a former President of the Massachusetts Municipal Management Association (MMMA).  He served on the Massachusetts Interlocal Insurance Association, Inc. (MIIA) Board of Directors.  He was on the Governor’s Advisory Council during the Dukakis and Weld Administrations.  More recently he participated on Lieutenant Governor Polito’s Special Municipal Focus Group.  He Chaired the MMMA's Future Managers Committee for many years.  Buzz received his B.A. in Politics from The Catholic University of America in Washington D.C.; Master’s in Public Administration from the University of Kansas.  He attended the Harvard University, J.F.K. School of Government Program for Senior Executives in Local Government.  Buzz brings a wealth of knowledge to HRS in all areas of government administration, as well as experience with public/private partnerships.